Thomas Terbay stashes his walker along the wall of the mirror-lined studio and shuffles to the center of the room. He raises his arms, moving silently through a series of tai chi positions like a martial arts movie in slow motion. Sweat beads on his forehead, and every few minutes, he pauses to catch his breath. He apologizes, because for the past two months leg pain has kept him from his usual routine of classes here at Master Gohring's Tai Chi & Kung Fu academy.

But Terbay, a former firefighter who credits the mental and physical benefits of tai chi with helping him turn his life around, says he'll be back to his regular schedule in a few weeks. And considering the odds he overcame in getting this far, it's not hard to believe him.

Terbay, 39, grew up in Austin. He earned a nursing degree and started working as an emergency medical technician at a volunteer fire department in Tarrant County. Even then, he was a big guy, weighing in at 315 pounds.

In 1991, he was working an apartment fire when he missed a rung on a step ladder and came crashing down. He hit the ground feet first, suffering a compression fracture in his mid-back. He wore a hinged cast for 10 months.

"At first I didn't have problems. But as the months went on, it became apparent I couldn't stand for long or run. My firefighting career was over and my nursing career, too," he says.

He started to gain weight. He couldn't stand for long and got out of breath after hardly any exertion.

"I was sedentary and continued to eat like a high-school football player," he says. He got depressed and moved back to his parents' home in Austin. Soon, he weighed 525 pounds and was essentially bedridden. He developed diabetes and heart disease. 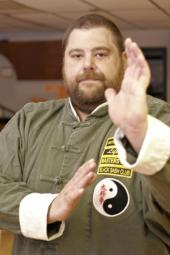 When his mother died in May 2003, he was spiritually adrift. Friends suggested he try yoga, but he felt he couldn't do it because of his size. "I couldn't get down on the floor and tie myself into a pretzel," he says.

He saw a flier for tai chi at his doctor's office, and assumed the ancient Chinese martial art was like yoga, only done standing. Maybe he could do that. The thought passed until he saw another ad a few months later. He remembered the karate classes he'd taken as a teenager. He decided to give it a try.

Terbay lasted just two minutes at that first introductory class. Then he sat and watched, mesmerized by what the students were doing.

"When I walked in the door, I felt this positive energy I hadn't felt in years," he says. "The tai chi was beautiful. I wanted to be able to do what those people were doing."

He started attending classes twice a week. In the beginning, he used a walker to get to class. For the first six weeks, he could last only five minutes. He kept at it.

"It took three months before I could substantially participate," he says. His classmates encouraged him. In six months, he exchanged the walker for a cane.

His "chi," or life force, was growing stronger. He started to heal, in many ways. Tai chi was helping him relax, and improving his coordination, flexibility, endurance and strength. It was calming him mentally.

"It gave me, before the end of my first year, my sense of confidence almost back up to where it was when I was a firefighter. I felt like part of a community," Terbay says. "That's all I had in my life  tai chi or doctors. And it was a better place to be than a doctor's office."

Slowly, his weight started to drop. So far, Terbay has lost 130 pounds. He hopes to lose more.

The style of tai chi that Terbay studies has 10 basic postures. Sometimes, the class moves through those postures to the beat of a drum.

Tai chi also incorporates the use of weapons, and Terbay is training to use a fan. In ancient China, the fan's stays were made of sharpened metal instead of bamboo, and were concealed in the user's sleeve. Terbay demonstrates, whipping his bamboo fan out of his sleeve with a pop.

For Terbay, though, tai chi is self-defense only in the sense that he has used it to save his own health. "It's self-defense from yourself  from your own poor choices, your own bad decisions and life pressures  not just someone on the street," he says.

Tai chi skills are measured on a 10-color sash system similar to the belt system used in karate. White is the most novice level; black the most advanced. Terbay's proudest moment came when he earned his white belt. It took six months.

"I never thought I'd get that white sash because I never thought I'd be able to stand through an entire class," he says. "That's when I really felt like part of the school." But even that sash doesn't mark the most important change for Terbay. "It's more about what's happened to me and how I've changed as a human being than how high I can kick or what sash I'm wearing," he says.

Now he's a purple belt, a little more than halfway through the 10-sash system. He's started a program to earn an instructor's certificate, and works a few hours a week for Master Gohring, recruiting potential students.

Tai chi is a nonimpact form of exercise. You don't have to have a sleek, toned body to reap its benefits. People who are overweight, or have arthritis or other physical limitations, can take classes. Some students come to class using canes or walkers. Even people who use wheelchairs can do a modified version of tai chi.

"It's excellent for people who are returning to exercise or who have never exercised," says Master Gohring, a fifth-degree black sash and owner of Master Gohring's Tai Chi & Kung Fu martial arts academy. "It's almost a form of physical therapy."

That's why he encouraged Terbay to keep coming to class.

"It is my belief that everyone can make it to black sash with the right training, environment and program," Gohring says. "That's what we provide here. I didn't consider that Thomas couldn't be successful."

Besides advancing his own training, Terbay has inspired other students.

"When you look at someone who gets up on the floor in his condition and participates and puts himself out there in front of people, your problems seem kind of dwarfed. You think 'Wow, if Thomas Terbay can get up there and do tai chi and live up to the challenges given by Master Gohring, I can do that,' " Gohring says. "To have Thomas get up there and overcome his fears right in front of us is like, well, OK. That's a leader."

Now, when Terbay misses a class or two, the other students at the academy ask about him and want to know when he's coming back. They've become a sort of support group that rallies around him when he gets frustrated.

Andy Prince, 38, a public relations consultant, started taking tai chi classes at Master Gohring's a year and a half ago to improve his fitness. He met Terbay, and was immediately struck by the former firefighter's persistence. "I thought, 'Here's someone who's trying to better himself, hats off to the guy,' " Prince says.

Eventually he got to know Terbay, who was at the studio nearly every day.

"When he started telling me his story, I was shocked and amazed and impressed," Prince says. "I thought I had a good motivating reason to come here, but I didn't fall off a ladder and get hurt. To think he comes to class every day with the things he's gone through was a tremendous inspiration to me. What would I do in his situation? Wallow in pity, stay in bed all day?"

In the past six weeks, Terbay has experienced pain in the joints and muscles of his legs. Doctors aren't yet sure of the cause. But he can't drive and is once again homebound.

He hopes the setback is temporary. He expects to return to tai chi, and has been visualizing the training even though he hasn't been able to participate at the studio.

Still, he attended a small tournament at Master Gohring's academy last week, watching with interest the competition and assuring fellow students that he planned to return to classes as soon as he could.

Besides continuing with his own training, he has another goal in mind  to encourage people who don't think they can get fit to start a tai chi program. Martial arts, he says, transcends the physical. It can provide mental and emotional tools for life.

"I still want to help people out with their lives, and I want to use tai chi to do it," Terbay says. "My hope is that they can look and see this guy was crippled, he weighed 130 pounds more than he does now. If he can do it, maybe I can."

Don't know kung fu from judo? Here's a primer on some of the most popular forms of martial arts. It's hardly complete: Several hundred different disciplines exist.

* Aikido - A Japanese martial art that emphasizes motion, combining joint locks and throws with the body movements of sword and spear fighting.

* Judo - The word means the 'gentle way' and judo includes attack and defense techniques as well as the physical conditioning and total health that comes from its practice.

* Karate - A martial art of unarmed self-defense in which hand or foot blows are delivered with special shouts from a poised stance. It stresses striking rather than wrestling or throwing an opponent.

* Krav Maga - A discipline developed in Israel to train students in self-defense, self-protection, fighting and combat skills, as well as skills to defend others.

* Sumo - The sport of giants, based on ancient military combat and loaded with ceremony, costumes and pageantry. Competitors try to force their opponents out of a ring or onto the floor with any body part above the knee through slapping, sweeps and throws.

* Tae kwon do - A Korean fighting art and the world's most widely practiced martial art. It is an Olympic sport, an artistic discipline, a system of self-defense and a way of life.

We may be a Martial Art but we won't twist your arm. Come Visit!